Minify your css to remove all unnecessary white space, line breaks, strips comments and characters in your code. Make your site load faster!

Add line break after every { }

1 - This tool works locally in your browser, our server does not store any data.

2 - Backup your original code before replacing it with the minify code. Some systems, such as Wordpress, use comments /* example */ as relevant information. If your css code needs to keep the comments, do the minify without them.

.Make your site smaller and faster to load by minify css code!

Minimize CSS turns your well-formed and beautified CSS code into optimized code by removing white space, indentation, newlines, and comments. But don't worry, these elements aren't necessary for CSS to be used successfully, and removing them makes your site load faster.

.See what our tool can do to optimize your css code:

- Convert values with "none" to 0 when possible

.Why should you do your own minify css instead of using a plugin?

The fewer files (css, javascript, jquery, etc.) your site needs to run, the faster it will load and the better grades you'll get on performance rating sites. Search engines rank the best sites first, and you can optimize your code to load your site faster, then you will take a considerable advantage.

Also check out other useful tools like percentage calculator and many other calculators! Visit our website and discover all our free tools! 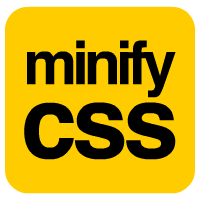